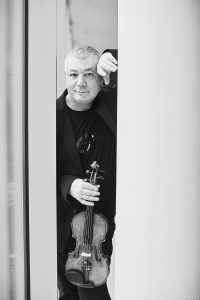 Born 1966 at Saint-Petersburg in a musician’s family. As a student of the St. Petersburg Conservatoire (1984-1990) he emerged as a mature musician with a well-established set of techniques and individual musician’s outlook, while during his postgraduate studies with Professor V. Ovcharek he earned the reputation of a talented teacher.

The uncommon personality and mobility in instrumental stylistics make Ilya Ioff attractive not only for audiences but also for contemporary St. Petersburg’s composers. Some of them, as B. Tischenko, S. Slonimsky, G. Korchmar, and L. Desyatnikov, entrust the premiere performance of their new compositions to him.

As soloist and ensemble musician, he has performed with such remarkable musicians as M. Argerich, M. Yansons, Y. Temirkanov, S. Stadler, A. Rudin, V.Ziva, N.Alekseev etc. in Russia and many European countries.

The repertoire list of Ilya Ioff is enormous. He performs works by all of the most prominent authors in the history of music who wrote for violin, from I. S. Bach to Ph.Glass. Among his awards are the Special Prize at the ARD Competition in Munich, Germany and the First Prize at the G. Viotti Competition in Vercelli, Italy.

The very first concert season of his work with the DIVERTISSEMENT CO as its artistic director (1998-99) proved the obvious gift of Ilya Ioff in this area, too. The careful attitude towards the ensemble’s traditions developed in previous years by professor E. Komarova (former artistic director) goes hand in hand with establishing an absolutely individual criterion of the ensemble’s sound and its own repertoire direction.

The recent years’ concerts featured compositions of the last three centuries, from Vivaldi and Bach to Gubaidullina and Martynov.

Such an ample repertoire and the sound ‘all-absorbing’ approach of the ensemble have won well-deserved success with Russian, European, and Japanese audiences. Ilya Ioff has recorded several compact disks in different functions. Among the recordings are Paganini’s Concerto No.1, sonatas of Mozart, Tartini and Brahms, trios of Schubert and Tchaikovsky, duos of Ysaie, Prokofiev, Mozart, Bartok, chamber music of Dvorak, Brahms, Arensky and Borodin, Schnittke’s Concerto Grosso No.1, etc.

Apart from his performing activities, he teaches violin at the St. Petersburg Conservatoire, Professor.

In 2002, Ilya Ioff was awarded the high title of Honored Artist of Russia and Honored member of SPb’ Philharmonic Society.